The store will not work correctly in the case when cookies are disabled.
Menu
Toggle Nav
Account
Skip to the end of the images gallery
BEST SELLER 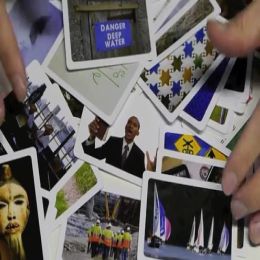 Skip to the beginning of the images gallery
Activity Overview Video

Be the first to review this product

Expresspack is a set of 53 playing card sized images, with a vast range of photos and symbols, carefully constructed and created by talented photographers and trainers Simon Whalley and Tony Wright.

Expresspack is very flexible and is used in many different ways for team training and coaching sessions. Visual metaphors are very effective for personal development coaching or team development sessions, and are used as icebreakers or an introduction activity; for reviewing and providing feedback at the end of a training session; or for provoking discussion and debate around specific topics using open-ended questions.

Images and visual metaphors are very powerful coaching tools to initiate conversations and discussions, as they help individuals express their needs and viewpoints more quickly and deeply. It provides a starting point for discussion about what an image represents for individuals, encouraging them to talk more openly-  even with those who may be more reserved in nature. The image offers a ‘safe’ way to effectively communicate sensitive topics by use of metaphors to express thoughts and feelings. Using visual metaphors and images also provides a better understanding of cultural differences and diversity among teams, as one image may represent many different things to different individuals.

For more ideas for icebreakers view the webinar on the right: Icebreakers with a difference from RSVP Design

A combination of images, photos, and symbols, carefully picked to be used as visual metaphors for personal development coaching or team development scenarios, allowing individuals to express their opinions & views more openly, and communicate effectively.

Using visual metaphors as a starting point for discussion and debate allows for sensitive topics to be addressed and discussed appropriately and effectively.

Click here for our guide to selecting the right image based activity for you!

We also have a new larger A6 size expresspack! 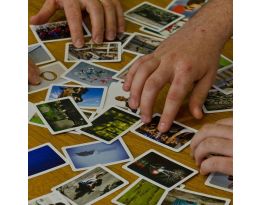 A combination of images, photos, and symbols, carefully picked to be used as visual metaphors for personal development coaching or team development scenarios, allowing individuals to express their opinions & views more openly, and communicate effectively.

Using visual metaphors as a starting point for discussion and debate allows for sensitive topics to be addressed and discussed appropriately and effectively.
Suggested uses for expresspack:

You may be using this pack of cards as a personal development or coaching tool in a generic sense to assist individuals. This may be in a mentoring role, as a manager in business, as a Youth or Community Worker or simply with someone you would like to help. A sample question might be: 'Identify one card which represents where you are now, and one where you would like to be in the future.' Once they have chosen their cards ask them to express their thoughts and feelings about the cards. Once this has been done you could ask the individual to identify a card which represents the first step on this journey.

If you are a facilitator / trainer and are similar to ourselves, just occasionally you will have been in a room with a group and conversations are not flowing! Often this happens at the start of a day, when the individuals are just sussing out the group and how they will contribute. We have found expresspack a great way of initiating conversations and discussions to help a natural flow into other ideas you may want to introduce. For example avoid creeping death introductions and layout a pack of cards and get individuals to pick a card which they think relates to them in some way and use it to introduce themselves.

Change is happening all the time, individuals are developing, organisations are changing, and global issues are affecting us all. Change management therefore is part of life and a subject which can be explored using expresspack. It is also worth considering whilst there is a lot of change often a lot of things may stay the same. One idea might be to ask individuals / team / department prior to a change initiative to identify a card which represents the state of the organisation now and another to show how they would like it to be in the future. This allows individuals to communicate effectively and safely how they feel about the change, which they might have avoided previously.

This is an important area of our work. Leaders and Managers need to help bring clarity to situations. Often they are not doing this, so some useful starting questions with which to use expresspack in this area might include: 'Pick 5 cards which represent your vision / what is important to you in your role?'

In a similar way to our Leadership Development work any work with teams usually needs to focus initially on a clarity of joint understanding. A useful question dependent upon the stage of team development might be: 'Pick a number of cards which illustrate your expectations of this team'. Expresspack has varying team development images which have a variety of different representations.

Individuals or teams may be reluctant to provide feedback or review an event / session truthfully, and Expresspack acts as a safe review activity. You may ask individuals to pick one image which represents how they felt before the session, and one representing how they felt after the session.

Reviews
Write Your Own Review
Downloads

Product prices shown do not include delivery costs We use international and local courier services to provide a fast, secure and traceable shipping service to our customers. Typically we will ship within one working day of receiving your order (if received by 14.00 local time), and your goods should be with you wherever you are in the world within one week!

We provide a 12 month unconditional guarantee. If you have any problems with our materials, we will replace any defective parts, or you can return the product for a refund.